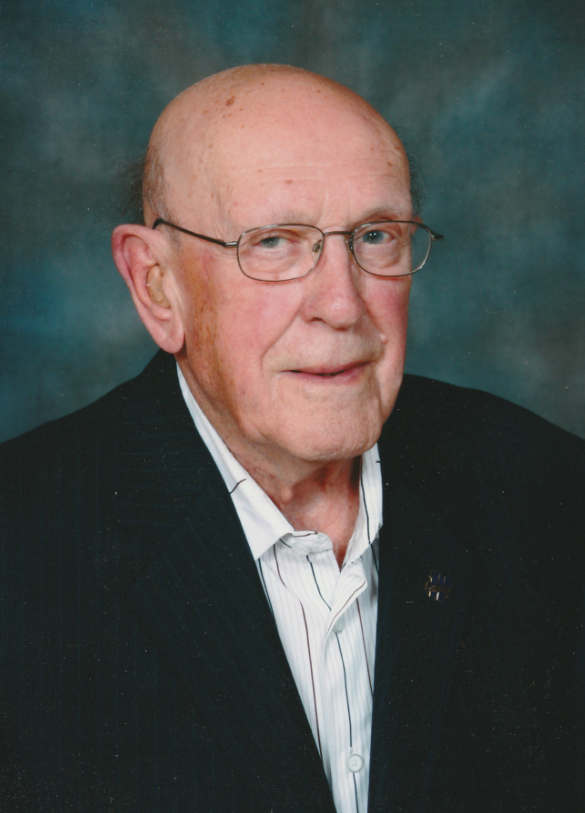 During WWII, Ray was a radar specialist serving in the Royal Canadian Armed Forces for four-and-a-half- years. For three-and-a-half of those years he was attached to the Royal Air Force in both England and West Africa. After the war, he attended the University of Western Ontario and graduated with a Bachelor of Science in Physics and Mathematics. During his Western years he was very active in student life. In his final year he was Prefect of Arts and Science, and was one of six named to the prestigious Honours Society.

During his working career he spent one year at the National Research Council in Ottawa, followed by one year of graduate studies at McGill University in Montreal, after that he spent five years with Northern Electric Company in Belleville and twenty-seven years with 3M Company in London. He was also a member of the Association of Professional Engineers of Ontario. At 3M, Ray’s expertise was in magnetic recording. He was chairman for a number of years of the Canadian Sub-Committee of International Electro-Technical Committee. In this role he participated in a number of meetings in various countries standardizing audio cassettes and video recording tapes. His work earned him a fellowship in the Society of Motion Picture and Television Engineers. He was also active in the Institute of Electrical and Electronic Engineers (IEEE). He was the first chairman of the London section of IEEE and is a Life Member.

Ray enjoyed his tennis, bowling and dancing. He will be missed very much by his family, friends, and associates. We would like to thank Cathy Stacey-Jones and the staff at Horizon Place for providing such amazing care, hospitality, and dedication to Ray. We would also like to thank Dr. Susan McNair and her staff at St. Joseph Medical Centre, they too went above and beyond in every way. Ray has bequeathed his body to the University of Western Ontario’s Schulich School of Medicine. Memorial Mass will be held at St. Michael’s Church, 511 Cheapside Street, on Saturday, October 5, 2019 at 11:00 o’clock. Arrangements have been entrusted to John T. Donohue Funeral Home.