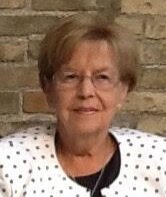 In the early morning of December 20th, Muriel passed away peacefully, surrounded by her family, after a brief battle with cancer.  She will be forever reunited with her loving husband of 64 years, Patrick, who left us in March 2020.  Muriel will be greatly missed by her son Michael, granddaughter Laura (Joseph) and great-grandsons Jamison and Logan, Muriel’s daughter Patricia and her son Kyle, great-grandson Liam, and daughter Caitlin.  She took great pride in her children and grandchildren, whom she loved deeply. Muriel was born in Wallaceburg, in 1932, the middle daughter of her deceased parents, Morley and Sara (MacDonald) McKim.

Muriel is survived by her sister Norma Amersault (Robert). She was preceded in death by her sisters Marjorie Whitson (John), Lola Holly (Andrew), and Arlene Peebles (Robert). She will also be missed by many nieces and nephews.  She also leaves behind many close friends.

After the birth of her first child, Muriel chose to give up her career to look after her family and home.  She has volunteered for many causes and charities over the years. The family would like to give a special thanks to the amazing staff at St. Joseph’s Hospice, who made Muriel’s last days peaceful and comfortable. Muriel will be cremated and will be joined with her husband during a celebration at a later date.