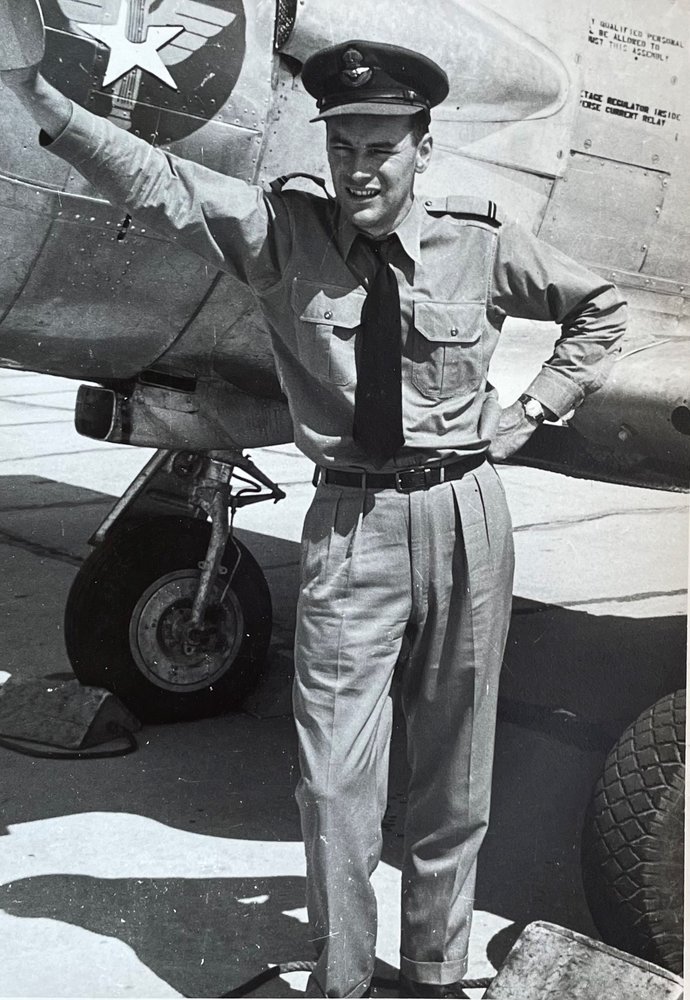 He served his country as a pilot in WW2, as an employee at A.V. Roe Canada Ltd. in the days of the iconic Avro Arrow and as one of the engineers tasked with the highly classified atomic bomb trials in Maralinga, Australia.

But Ronald Bertram Hall’s greatest legacy is that of extraordinary husband, father of two and grandfather of six. Ronald left us peacefully at his home, on Monday, June 7, 2021, just shy of his 99th birthday, with his wife of 64 years, Mary (nee Kelly) at his side. Adored by his sons, Peter (Mary), Brian (Jennifer) and cherished by the grandchildren, of whom he was so proud; Mark, Andrea, Bridget, Neve, Jeremy and Avery. He is pre-deceased by his brothers Allan (Nat), Howard (Verna) and sadly missed by nieces Barbie (Hall) Matanic, Lenore (Hall) Turner and Joanne (Hall) Bromilow.

Ronald came into this world in 1922, born to parents Ida Logan and Ernest Frederick Hall. A remarkable man with a quick wit and deep love of family, Ron came from humble beginnings in east Toronto. His childhood was set amidst the backdrop of the Great Depression, having lost his father when he was just an infant. Happy summer memories were forged at Lake Scugog in the Kawartha’s, with his Uncle Bertram Logan and Aunt Bell.

At age 19, he joined his brothers in service as a pilot in the RCAF, stationed in England with Transport Command 435 Squadron, conducting reconnaissance missions over the ocean to spot enemy destroyers and submarines. His time in the cockpit of a DC-3 also included transporting troops, equipment, and dignitaries. All three branches of Canada’s contribution to the war effort were represented by the Hall family, Allan serving in the Infantry, Howard in the Navy.

With the brothers safely back home, memories and laughter were etched into the family basement, as Ron and Howard built a speedboat, aptly named “Scrounge,” after the parts that had been somehow “donated” by De Havilland aircraft, where Howard was an employee. Legend has it that a new door had to be crafted to set the boat free from the basement.

The post-war years would see Ron graduate from the University of Toronto in aeronautical engineering, later perfecting his craft at companies such as A.V. Roe, where he would fall in love with an administrative assistant name Mary, “the girl down the hall.”

Ron’s brilliant entrepreneurial skills were honed at various industries across Ontario and Quebec, ultimately leading him to create his own company at age 53. “Autotube Ltd” was born in Strathroy, Ontario, growing into several plants across Southwestern Ontario.

After great success with what ultimately became a family business, Ron carved out a peaceful retirement of golf and sunshine with Mary, first in Marco Island, and ultimately Naples, Florida.

As the last of his golfing buddies to depart this earth, there is no doubt a tee time awaiting him in his next chapter. We, his family, wish him peace and rest. We are eternally thankful for Ronald Bertram Hall.

A private family farewell has been arranged.  In lieu of flowers donations to St. Vincent De Paul would be greatly appreciated.  (John T. Donohue Funeral Home)