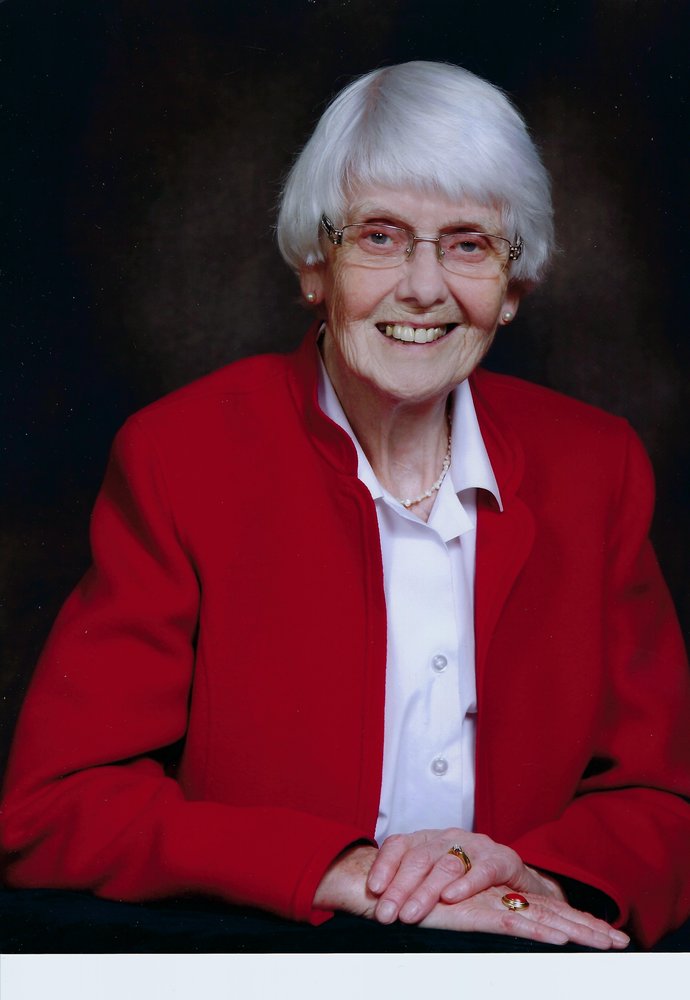 The details of Erika’s life only hint at the reality of this energetic woman and her prodigious talent, who courageously forged a life of love that benefitted us all. A 52 year happy marriage to Tony; 12 children; 30 grandchildren; 7 great-grandchildren; expression as a textile artist and teacher; a faith filled life as a community minded Catholic.

German born in 1929 to Erich and Hildegard Schlotmann and raised with her sister Hannelore (d. 1974) against the harsh backdrop of WWII, Erika made an independent choice in opposition to her parents’ wishes, to become engaged to a Canadian soldier on NATO posting whom she had only known for six weeks.  While this love story was the central feature of the story Erika told about herself, it was the use of her energy and talents to do loving things for her family and community that was key to the abundant life she made for all. Her guiding force was the artists’ urge to create - whether it was babies, textiles or baking - and to generously share her creations with others.

Erika’s ability to communicate with small humans cannot be underestimated. Mothering infants in a 20 year span; being an engaged, baking-ready, card-playing, book-reading Oma; recently beaming at the youngest great grandbaby Delia - still meant there was room for one more at the table. Nephews and nieces from Germany, neighbourhood children, cousins from Belle River, Ontario were welcome.  As those small children grew, Erika engaged in relationships with an understanding of who they were and what they needed, sometimes before they recognized it in themselves. She was a woman ahead of her time, a feminist with an inclusive mindset who encouraged her children to work to their full potential. The only preconceived notion she held onto for who her children needed to be: was educated. Her granddaughters in particular are influenced by her emphasis on education and her bad-ass attitude.

Trained in Germany as a textile engineer, Erika designed and sewed, knit and crocheted (often without actually looking at the complicated patterns being formed underneath her fast moving hands) throughout her life. Her artistry was evident in the intersection between the idea of the beautiful yet practical thing; the needs of the person it was meant for and the selection of the right textile to bring it to life. In the early 1970’s Erika studied weaving at Fanshawe College, London. Recognizing her quick talent at both learning and teaching, she was invited to take over the beginner class the following term. This launched her 20 year part-time teaching career. What to do with Ingrid, her twelfth child? Just bring the baby to class!

Ingrid returned the favour in 2003 when her family (Chris Sylvestre and baby Samuel; later joined by Alexandre and Anthony) moved to Hallville ON, bringing Tony and Erika along with them. Brockmanns are especially grateful to the Sylvestres that Erika’s final years were enjoyed in a family setting where jam making, raisin bread, crumb cake, shortbread cookies, rommé card games and especially love were shared in a fully integrated household. To her many talents Oma added mini-stick hockey playing - Oma versus Anthony. In her final months Erika referred to her youngest child as “my mother.” When asked about this, Erika responded, ”She looks after me just like a mother.”  The highest possible praise.

Erika created rituals that had Catholic faith at its core. Within the St. Daniel the Martyr (South Mountain, ON) community, Erika initiated a Prayershawl Ministry where knitters gather and make shawls for the sick while praying. At last count, 125 shawls had been sent out. Erika, after having made countless herself, received one which she gratefully wore in her final months. Another way she lived her Catholic faith: she was an informed life-long reader with a caring regard for the dispossessed; she was aware of current events and always voted.

Here is the concluding paragraph where the loose threads are woven in: the way Erika loved to polka with Tony and dance with the young crowd at family weddings; her love of performance and music which found its way to all her children and grandchildren; her willingness to try new things; her encouragement for all we did; her fierce determination when faced with hardship; her direct manner that was always true to her; her infectious laugh; her tenderness; her warm hugs; her glad and radiant smile.

We carry you in our music, our dancing, our baking, our knitting, sewing, weaving and creating. In the generations here and yet to come. We experience both grief and grace; and are grateful for your life. We love you Mom, Oma, Erika.

Many thanks to the kindness and care of the Woodland Villa Retirement Home, Long Sault ON especially Holly, Kelly, Bailey, Alex and Sherry where Erika lived the final 1.5 years of her life.

If you wish to join Erika’s family for a Virtual Sharing of Stories of the Life and Times of Erika Brockmann please join us at 7 PM EDT on Sunday, May 16 2021.  Details can be found at the following link: www.brockmann.com/Erika

A private wake and funeral will be held, in accordance with the COVID-era requirements.

You are welcome to join us at the Livestreamed Funeral Mass to be held on Monday May 17, 2021 at 11 AM EDT at the following link: https://youtu.be/wcv-frc_k8Q or by CLICKING HERE

To help with the participation of Erika’s Funeral Mass from afar, please download the Worship Aid at the following link: www.brockmann.com/Erika

In lieu of flowers, please consider donating to Erika’s two favourite charities. Sisters of the Precious Blood can be found at http://www.pbsisters.on.ca/monasteries/london/

The Ottawa Mission can be found at https://ottawamission.com/

Arrangements entrusted to the Byers Funeral home, South Mountain (613 989-3836). Online condolences may be made at: www.byersfuneralhomeinc.com or www.donohuefuneralhome.ca