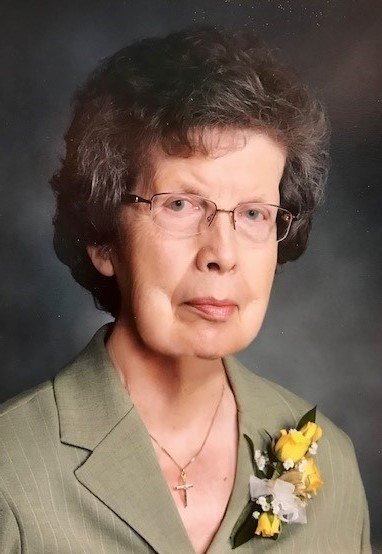 Sister Anne Louise is remembered with affection by her CSJ Sisters, her nieces Janice Mayuk, Anne Heathcote, and Colleen McIImoyle and longtime friend, Brother Anthony.  She was predeceased by her parents Lucy (Primeau) and James Cape, brother Robert and sister-in-law Jane Cape.

Most of Sister Anne Louise’s life was spent in education as an elementary school teacher at St. Martin’s, St. Peter’s and St. John’s Schools in London, and as principal at Sacred Heart and St. Benedict’s Schools in Sarnia and as Religious Consultant for the Lambton R.C.S.S.B.  Upon retirement, Sr. Anne Louise studied for a year at the Credo Program in Spokane, Washington. From 1989 to 2001 she was Pastoral Minister at St. Ursula’s Church in Chatham before moving to the Residence of the Sisters of St. Joseph in London.

In her own quiet, unassuming ways Sister Anne Louise endeared herself to those who came to know her.  Anne Louise was private but never distant. She enjoyed relationships established over a lifetime. She keenly followed world events and was eager to read the latest magazines and books. Anne Louise witnessed for us how to accept illness and lessening mobility with dignity.

Due to continuing COVID-19 restrictions a private vigil service will be held at the Residence of the Sisters of St. Joseph on the evening of Thursday, August 12th.  A private funeral liturgy will be celebrated in the chapel at 10:30 am.  on Friday, August 13th You are invited to attend her funeral with us virtually. The link to access the service is www.csjcanada.org/funeralalc

Expressions of sympathy or donations to the works of the Congregation in memory of Sister Anne Loise Cape may be made at www.csjcanada.org.