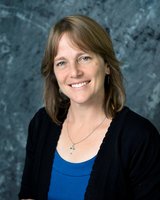 ANDERSON, Janet Patricia, née Smith, (Teacher, Limestone District School Board, Albert College and Matthews Hall) – Born October 19, 1967 in Kingston and died February 4, 2020 in London, age 52, after patiently enduring a ten-year battle with cancer; beloved wife of Richard Anderson of London; cherished mother of Aidan, Calum, Ronan and Brigid; dearly loved daughter of Evelyn and the late Jim Smith and sister of Philip (Homa), Lorna Marchuk (Ron); Michael; Diane; and Suzanne Lamothe (John); much loved daughter-in-law of Sadie and the late Moffatt Anderson; sister-in-law of Aaron Anderson (Margaret) and Alana Pindred Anderson; and loved and remembered by a large extended family of nieces and nephews. Janet was raised in Kingston, Ontario, the youngest of six children in the close and loving Smith Family. She attended Centennial and Calvin Park Public Schools and LCVI before graduating from Queen’s University in preparation for a career in teaching. Janet was a rare and talented teacher with a big heart for children, especially those in Grade 1, where she forged strong and lasting ties over many years with children who loved and trusted her. Although Janet enjoyed her work, her greatest treasure was her own little family, which she regularly described as a “beautiful and most perfect life” – the only true possession of lasting value. She was an unconditionally loving and generous wife to Ric and the most beautiful and devoted mother to their four children, each of whom adored her. It was clear to everyone that her vocation as a wife and mother was what mattered most in her life. Janet was a wise, patient, clear-thinking, and generous woman. When she was diagnosed with breast cancer in the summer of 2010, her only prayer was that she would be able to live to see all four of her children to adulthood and be preserved in good general health, so that she could continue to care for the family she loved so much. Janet received this great blessing and never wasted a day, always putting her husband and children before herself. In 2017 and again in January 2020 when she was struggling and in need of support, her sister Suzanne travelled from Belgium to be with her family. Janet was truly grateful for this love and tenderness shown to her. Over the last decade of health challenges, Janet was beautiful, cheerful, and intrepid. She was sustained by her strong Catholic faith in the face of every obstacle and setback. Along the way, she was also upheld by skilled and compassionate doctors, as well as by spiritual support from many who loved her. Janet always said that the finest people worked in cancer care and that she was always so grateful for the small kindnesses they showed to her. Over the last few days, when her health was deteriorating rapidly, Janet had the great gift of being surrounded by the love of her four children, who were all at her side during her brief stay in hospital. While she had mostly lost the use of her voice, she still maintained her bright and confident outlook throughout, cheerfully texting her friends and family and laughing together with her kids, sister, and husband. Her family gives thanks to God for the gift of her life! Arrangements have been entrusted to John T. Donohue Funeral Home, 362 Waterloo Street at King Street, London. Visitation, February 7th, 2:00 – 4:00 PM and 7:00 – 9:00 PM. at Donohue Funeral Home. Mass of Christian Burial, St. Peter’s Cathedral Basilica, Saturday, February 8th, 11:30 AM, Father Jim Mockler officiating. Interment to follow at St. Peter’s Cemetery. In Janet’s memory, the family welcomes donations to the London Regional Cancer Centre or the Breast Cancer Program at the Cancer Centre of Southeastern Ontario.