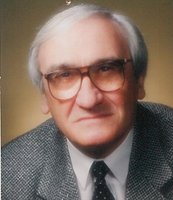 BYRNE- JAMES WILLIAM of London On. passed away peacefully at Parkwood Hospital, Veterans Wing, Wednesday Jan. 22nd/20 in his 94th year. Beloved father of Joyce Byrne and her husband Stewart Mussolum. Grandfather to Kathleen Mussolum and her husband Richard D'Älessandro and Great Grandfather to baby Lilla D'Älessandro of Cambridge. Survived by nieces Julie Pickard (Dave) of Uxbridge and Maureen Dodd (James) of St Thomas and John McManus of London. Predeceased by his much loved sisters and their husbands, Bernadette McManus ( Edward) and Mary Prendergast (Frank). Son of the late John and Elizabeth (Breen) Byrne. Survived by many nieces and nephews and their young families. Jim was born in London on July 10th 1926 and lived and worked as a young man in Aylmer and St Thomas. He enlisted in the Army at just over 17 years of age, in the Infantry and volunteered for the war in the Pacific. James was a successful Realtor in the London Area from 1974 to 2008 and always said he was fortunate to have found a career he truly loved. Previous to that he was employed at London Psychiatric Hospital and G.M.Diesel. He spent the last 3 years happily at Parkwood Veterans Hospital in London on the 4th floor Elgin Wing. He could not say enough great things about the staff, fellow Veterans, the activities and of course the food! The family will receive family and friends at John T. Donohue Funeral Home, 362 Waterloo Street at King Street, on Saturday evening, January 25th from 5:30 pm until the time of the funeral service at 7pm. Interment in St. Peter’s Cemetery at a later date. Memorial donations may be made to Veterans Care and Comfort Fund, Parkwood Institute, P.O. Box 5777, Station B, London On. N6A 4V2.