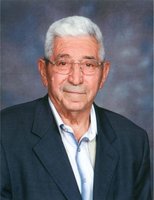 Surrounded by his three children at Glendale Crossing, he peacefully passed away in the afternoon of Wednesday, January 8, 2020 in his 88th year. Predeceased by Filomena, his loving wife and lifelong companion of 50 years in 2010. Predeceased by his parents Angelo (1993) and Maria (1979) Masciantonio of Italy. Son-in law of the late Domenico (1982) and Maddalena (1986) D’Alessandro of London. Loving father of Angelo (Anna) and Sergio (Lorella) Masciantonio, and Marilena (Giuseppe) Moschetta of Oakville. Doting nonno of Marcello and Magdalena, Cristina and Evan, Giulia and Gabriele. Brother of the late Rosa Masciantonio (2017) (Carmine DiGuglielmo 1964) of Italy. Dear brother-in-law of Antonio (Carmela) and Mario (Antonietta) D’Alessandro of London. He will be sadly missed by several nieces and nephews, close family friends and relatives in Canada, US and Italy. The family would like to thank the nurses and staff who gently and lovingly cared for him during his short time at Glendale and a special thank you to Jerry-Lynn who willingly volunteered her free time to be a friend and comforter to him both at his previous Highview Residence and at Glendale. Visitors will be received at the John T. Donohue Funeral Home, 362 Waterloo St. at King St. on Sunday, January 12, from 2 - 4 and 7 – 9 with prayers in the evening at 8 pm. Funeral Mass at St. Mary’s Catholic Church, 345 Lyle St. at York St. on Monday morning, January 13, at 11 am. Entombment to follow at Holy Family Mausoleum at St. Peter’s Cemetery. Donations in remembrance may be made to a charity of your choice or to the St. Mary’s Restoration Fund.